All my puny sorrows / Gadon, Sarah
Pauvres petits chagrins
"Based on the 2014 international best-selling novel by Miriam Toews, All My Puny Sorrows is the poignant story of two sisters, one a concert pianist obsessed with ending her life, and the other a writer who, in wrestling with this decision, makes profound discoveries about her herself."--www.imdb.com.

"Two robbers steal an ambulance after their heist goes awry"--www.imdb.com.

"An immigrant worker at a pickle factory is accidentally preserved for 100 years and wakes up in modern-day Brooklyn"--from www.imdb.com. 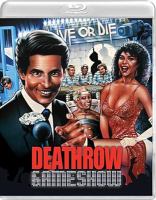 "Chuck Toedan's the host of a game show featuring death row convicts competing in life-or-death contests in hopes of cheating the executioner or, at the very least, winning some nice prizes for their next of kin. Not surprisingly, Chuck has made more than a few enemies, from outraged viewers trying to ban his show, to families of losing contestants looking for revenge. A hit man hired by one such family has shown up at Chuck's office, and he'll need to enlist the help of his most outspoken critic to keep from ending up like most of his contestants."--www.imdb.com.

Doctor Strange in the multiverse of madness / Cumberbatch, Benedict
Parallel title from container:
"Doctor Strange teams up with a mysterious teenage girl from his dreams who can travel across multiverses, to battle multiple threats, including other-universe versions of himself, which threaten to wipe out millions across the multiverse. They seek help from Wanda the Scarlet Witch, Wong and others"--from www.imdb.com.

"When two polar-opposite families are forced to camp together, the dads struggle to hold onto their families and marriages as they compete for the coveted camp trophy."--www.imdb.com.

"Story centers on a traumatized woman fleeing from her abusive ex-husband with her 7-year-old son. In their new, remote sanctuary they find they have a bigger, more terrifying monster to deal with."--www.imdb.com.

"A maid living in post-World War I England secretly plans to meet with the man she loves before he leaves to marry another woman."--www.imdb.com.